Reelin’ In The Years Productions (RITY), the world’s largest archive of music footage has signed a deal with legendary rock band The Doors to represent their unique footage and photo archive for licensing.

Jeff Jampol, manager of The Doors and other legacy artists such as Janis Joplin, Jefferson Airplane and Ramones approached RITY on the band’s behalf and asked them if they’d like to handle the archive. 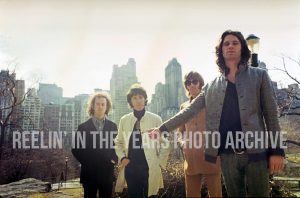 “The Doors chose David Peck and Reelin’ in the Years to represent The Doors archive for two reasons. First, they have a stellar reputation in the footage licensing business, especially in the area of music and entertainment footage. Second, they seemed up to the challenge of sorting out our archival collection and getting it ready for market. They did not disappoint us in either area, somewhat miraculously, if the truth be told.”

Both Jim Morrison & Ray Manzarek were film students at UCLA and their passion in the visual medium was used throughout The Doors career. In March 1968, Paul Ferrara, a friend of the band, began filming the group on 16mm and capturing snippets of the band in concert, backstage, in the studio, on vacation and in airports. A month later they brought in Babe Hill to capture audio on reel-to-reel tape. The most iconic moments of filming were when they captured The Doors at the Hollywood Bowl on July 5, 1968. The filming continued through September 1968 and subsequently was edited into a film called “Feast Of Friends” and only a small portion of the film footage that was shot has ever seen the light of day.

In 2008 The Doors had all of the existing 16mm film elements transferred to Hi-Def. The film lab made a critical mistake prior to transferring the footage, each original film reel had contained the information as to the date and location where The Doors were filmed but in order for an easier transfer the facility spooled the original film reels (in no particular order) onto larger reels, which caused all the pertinent date & location info to be lost.

“The archive required a massive effort in historical sleuthing to catalog and prepare for licensing — a project that Peck and his team took to with zeal. We essentially gave RITY 50 hours of footage on a hard drive and told them to “figure it out” and, almost unbelievably, they did. The first thing they did was find out all of the dates that The Doors played on that tour, and which shows were filmed.

“RITY then had to figure out the rest, using whatever visual clues were available in the footage itself, including, so I am told, street signs and local advertising to identify particular cities, and even the tiles on the floor and ceiling at LAX to decipher what airport they were in. Their dedication to historical accuracy was maybe a bit insane, but that kind of authenticity and accuracy is what we require. And the results so far have been extremely impressive. As a result of their tenacity, for the first time in 52 years our archive is cataloged and ready for use by producers. In addition to all the amazing footage of The Doors that Reelin’ In The Years catalogued, Peck called me up to tell me he discovered amongst the raw 1968 “Feast Of Friends” film footage, eight minutes of Howlin’ Wolf playing in a small club in Chicago. I had no idea why that would be in our archive so I called Robby Krieger (The Doors’ guitarist), who told me that he remembered it being shot by Jim Morrison! Clips from our archive will appear in the upcoming Laurel Canyon documentary, which will be released in 2020.”

David Peck, president of Reelin’ In The Years Productions, said, “We are honored to represent the footage of The Doors as well as their photo archive and to continue sharing the legacy of this significant band whose music, even nearly 50 years after their heyday, still inspires and entertains new generations of fans.”

Jampol stated, “We are more convinced than ever that RITY is the right home for this irreplaceable collection, and I cannot recommend them highly enough.”

In addition to the many hours of unique footage, The Doors archive also contains over 2,000 photographs showing the group from 1966 before they were signed through the recording of the last album to feature Jim Morrison in 1971. This archive is a treasure trove of both moving and still images of one of the most influential bands in the history of Rock & Roll and it is now available for licensing through Reelin’ In The Years Productions

Of course, all this is in addition to the 30,000 hours of music and 8,000 hours of interviews in our footage archive.