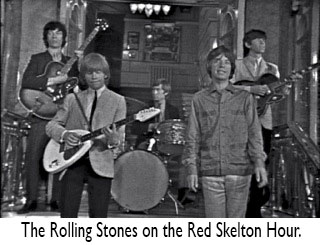 Reelin’ In The Years Productions (RITY), the world’s largest music footage library, has announced an agreement to exclusively represent for licensing all of the music footage from the classic television program The Red Skelton Hour, which aired on CBS from 1962 – 1970. This footage is unique in that the music performances haven’t been seen since the program was originally broadcast.

Red Skelton is widely considered to be one of the greatest entertainers of all time, and his television program, The Red Skelton Hour, is acknowledged as one of America’s finest TV variety shows. Throughout the program’s history, many of the top musical artists of the day appeared, including the Rolling Stones, Simon & Garfunkel, The Animals, The Kinks, The Fifth Dimension, Jan & Dean and Dionne Warwick. Reelin’ In The Years Productions will be bringing its vast experience in the field of licensing to market the music footage from the show. The company has already begun the process of meticulously cataloging the library, and has started making footage available for clips to be used in various documentary productions.

The Red Skelton Hour archive contains a “who’s who” of notable guests including some of the greatest musical icons of the era. The Rolling Stones made one of their earliest national TV appearances on the program  — two months before their first time on The Ed Sullivan Show — performing three songs including their first American single, “Tell Me.” The Beach Boys appeared twice on the show: once in 1963 (their second time ever on national TV, and with original member David Marks still in the band) and, again, in 1964 performing “In My Room” and “I Get Around.” Other gems in the archive include Three Dog Night performing their smash hit “Easy To Be Hard,” The Four Seasons singing their #1 hit “Sherry,” three appearances by Johnny Rivers including renditions of “Secret Agent Man,” “Memphis,” and his chart-topping hit “Poor Side Of Town” and The Association performing their #1 hit “Windy.” Possibly the rarest musical guest on the show was Iron Butterfly, who performed their classic “In-A-Gadda-Da-Vida.”

One of the greatest strengths of The Red Skelton Hour archive is the exceptional collection of “British Invasion” performances; virtually every major UK act, save the Beatles, appeared on the program. In addition to The Rolling Stones, other artists include The Kinks, The Animals, The Hollies, Manfred Mann, The Searchers, Billy J. Kramer & The Dakotas, Dusty Springfield, Peter & Gordon, The Honeycombs, Chad & Jeremy, and Freddie & The Dreamers. To view a sampling of the unique content from The Red Skelton Hour that is now represented by RITY please visit http://www.youtube.com/watch?v=pXXZsvDZlMc for a 9-minute trailer.

Commenting on the The Red Skelton Hour archive, Reelin’ In The Years founder and president David Peck stated, “Representing the performances and interviews from the musical guests on The Red Skelton Hour is truly a great honor. The holdings are incredible, featuring many unique and one-of-a-kind performances. In addition, since the music performances haven’t been utilized in any form since the early 1970’s, it’s the rediscovery of a great American treasure.”

Reelin’ In The Years Productions was founded in 1992 with the goal of preserving music performance footage from around the globe and making it available to the entertainment industry in all forms of media. Over the past 15 years the company has signed representational deals with many of the words largest television stations. In addition, RITY also represents many smaller independent companies as well as private home movie archives. As a result, the company has amassed the world’s largest library of music footage housing over 20,000 hours of material from the last 60 years. Although RITY has always specialized in music footage licensing, the recent representation of the daily talk show, The Merv Griffin Show (1965 – 1986), the company has branched out to license over 2000 hours of other significant forms of footage including in-depth interviews with historical figures, celebrities and comedians. The signing of The Red Skelton Hour comes close on the heels of RITY’s recent signings of The Jack Benny Show as well as the music performances from The Tonight Show Starring Johnny Carson (1962 – 1992) and The Bob Hope archive containing over 280 Bob Hope Specials from 1950 – 1994.