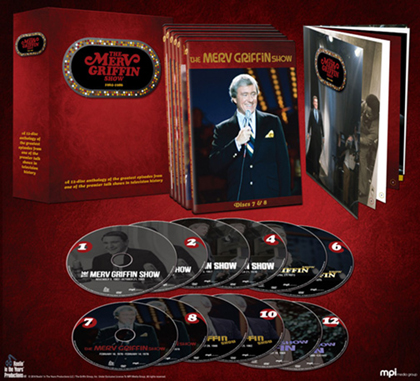 New York, NY (September 25, 2014) – In the pantheon of great American talk-show hosts stands the charming and intelligent Merv Griffin, who became one of the most beloved TV personalities of his time, thanks to his long-running, 10-time Emmy-winning daily talk show. Now, in an unprecedented retrospective covering 24 years of star-studded entertainment and provocative in-depth interviews, MPI Home Video and Reelin’ in the Years Productions will release THE MERV GRIFFIN SHOW – 1962-1986 on November 4, 2014. The 12-disc collection, containing 44 classic episodes and more than 7 hours of bonus material, has been newly transferred from recently discovered master tapes, making for a spectacular viewing and listening experience.

To view the trailer visit: http://youtu.be/qRHc02XvFn0

THE MERV GRIFFIN SHOW – 1962-1986 features more than 200 guests from the worlds of entertainment, politics, music, sports, literature and art, most of which have not been seen for decades. Over its 42 hours, viewers will be entertained by the likes of Mel Brooks, Lucille Ball, the Everly Brothers, Willie Mays and Aretha Franklin; enlightened by Salvador Dali, Dr. Timothy Leary and Maya Angelou; and inspired by Dr. Martin Luther King, Jr., Rosa Parks, Pres. Ronald Reagan, and Sen. Robert F. Kennedy. Among the film and TV legends interviewed by Griffin in this collection are John Wayne, Bette Davis, Gene Wilder, Laurence Olivier, Ingrid Bergman, Farrah Fawcett-Majors, Warren Beatty, the cast of The Golden Girls, Dennis Hopper, Jayne Mansfield, George Clooney, Jane Fonda and the final interview with Orson Welles who died just a few hours after the show.

The array of comedy greats alone is astounding. Here are the young Jerry Seinfeld, George Carlin, Bill Maher and Jay Leno, as well as Richard Pryor and Jerry Lewis together (!), Joan Rivers, Steve Martin, Moms Mabley, Bill Cosby, Henny Youngman, Jack Benny, Redd Foxx, Carol Burnett, Andy Kaufman and Woody Allen. In a new interview filmed for this box set, Jay Leno reminisced about the show: “When you go back and look at all the comics that started with Merv, it’s pretty amazing because most of them did do Merv before they did The Tonight Show. Merv broke as many comics as almost any other show.”

In juxtapositions that only Griffin would dare attempt, a comedy routine in 1965 by Phyllis Diller is followed by a conversation with the Japanese officer who helped plan and lead the Pearl Harbor attack; the next week the ground-breaking young comic genius Richard Pryor leads to a chat with contentious and brilliant record producer Phil Spector.

Among the collection’s 50 great musical moments is a 1972 tribute to Stax Records hosted by Soul legend Isaac Hayes, 17-year-old Stevie Wonder singing “I Was Made to Love Her,” Merle Haggard performing at San Quentin prison in 1971 and 19-year-old Whitney Houston in her national TV debut in 1983.

The extensive bonus material includes seven hours of interviews with such wide-ranging figures as Norman Rockwell, Barbara Walters, Adam West and Burt Ward of Batman, James Michener, Alec Baldwin, Muhammad Ali and many more. Other extras include the aforementioned interview with Jay Leno, vintage promo trailers, and a 52-page booklet with exhaustive notes, rare photos, memorabilia and a foreword by Dick Cavett.

THE MERV GRIFFIN SHOW – 1962-1986 is a cultural treasure trove providing insight into almost a quarter century of American thought, style and attitudes as seen through the prism of one of the premier talk shows in American television history.

About Reelin’ in the Years Productions
Reelin’ in the Years Productions is regarded as having one of the most prestigious footage libraries of musical artists, entertainers and history makers and has produced more than 70 DVD titles including the Grammy-nominated American Folk Blues Festival series, the multi-platinum-selling Definitive Motown series, the British Invasion series and the award-winning 36-title Jazz Icons series. RITY producers David Peck and Tom Gulotta spent more than two years meticulously cataloging and combing through 2,500 hours of the Merv Griffin Show archives to hand-select the best episodes and moments that underscore the historic significance of the program. The Merv Griffin Show — 1962-1986 is the first in an anticipated series of releases from this archive through MPI Home Video.  www.mervgriffin.com